A horror for every proud carbon bike owner, the bike is leaning against a wall, the handlebars turn crosswise and there is a crack in the top tube, or you are rudely hit, another cyclist knocks you down and the seat stay is cracked. These and many other misadventures are part of the life of a real racing cyclist and often cannot be avoided, but is this the death blow for a carbon bike? Not at all, even though there are critical points on the carbon frame, most of the parts can be repaired without any restrictions for further use, within the original contours, without ugly bandages or additional material application.

In this article we try to show different repair possibilities.

The positive in front, a small crack or quirk is not necessarily worrying. An assessment belongs in experienced, specialised carbon technology companies and should be clarified for your own safety.

Bicycle frames made of carbon, by the way, also other lightweight components, are made of a so-called fiber composites, which consists of several layers of carbon and are fixed together by the matrix, the epoxy resin, to form a composite. Each individual layer is load orientated, load-optimised in its alignment and thus has a significant influence on the overall performance. However, if you consider the complexity of a carbon frame, a single point of damage, depending on the position, has an extremely small influence, as not the entire carbon material thickness is damaged, but "only" a single layer, few fibres of the affected layer(s).

However, the local failure of one or more carbon fibres should not be neglected, because as a material with lightweight construction potential, the main criterion is a frame that is as rigid as it can be with the lowest possible weight. This of course rules out general durability and resistance to improper use, so making the expensive high performance sports equipment fragile, as no permanent reserves for individual, defective carbon fibres are built in.

These built-in reserves can still be found in the models of the early days (late 90s and 2000s) made of carbon, when the lightweight construction potential was far from being exhausted. These models are relatively heavy, but they have a better general durability and are less sensitive to shocks and other damages.

For the non-expert, it is often difficult to make an assessment of carbon, because the material and fracture behavior is different from that of aluminium or steel. Therefore you only have to look at the characteristic stress-strain diagram in comparison. Before fracture, metallic materials deform, carbon remains almost unchanged until sudden breakage occurs. However, this is only the scientific observation of a single string. In the compound as a complex, designed lightweight component made of carbon, this must be evaluated in a differentiated manner.

Therefore, please keep an eye on your carbon frame and carry out a regular visual inspection of the entire sports equipment. A good test is: if a crack widens, it enlarges and what does the "htt-test" say - the high-tech thumb pressure test - if the area tends to be softer, does it flex more? This would be a clear indication of a delamination, which must be removed !!

In case of doubt, a non-destructive test should be arranged. For further information get in contact with us.

Difference in the material properties of steel and carbon 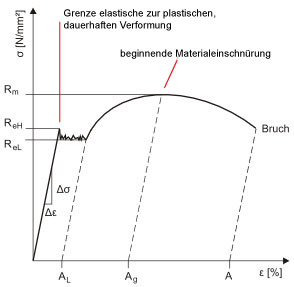 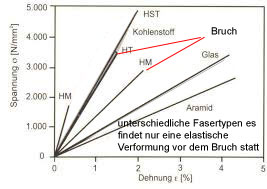 Diagrams are only characteristic and not to scale

The diagram on the left shows the typical stress-strain diagram of steel. As long as the load on the material is in the linear range, i.e. the straight line starting at the bottom left, the material deforms elastically, which means that it returns to its original state after the end of the load. If the load is exceeded, the plastic deformation begins, which can then be perceived visually. The steel deforms until it finally breaks.

With carbon fibres, glass, aramid, see right picture, the fibres behave under load continuously linear until they break. There is no, respectively a very very low elastic deformation.  There is therefore no perceptible plastic deformation before the breakage. Please note that carbon fibers also have an elastic deformation which is very small compared to steel, but this fact can still cause harmless hairline cracks on the carbon frame in the transition between the installed components of different material properties, e.g. bottom bracket knots carbon to aluminum bottom bracket shell.

In principle, every crack must first be viewed with a critical eye and should be repaired as soon as possible, because under further stress a crack leads to a creeping enlargement of the damage, usually not visible from the outside, and thus leads to the apparently mythical, sudden failure. This applies in particular to damage, hairline cracks, to tubes, such as top, bottom, seat tube and seat stays.

The frequently asked question: " Maybe just a damage to the paintwork ?" can be answered in most cases with a clear no. If the frame is black, transparent coated with clear lacquer, there is usually a structural damage. However, a more differentiated view must be taken of carbon frames painted coloured and above all in white, as a relatively thick layer of paint must be applied before full coverage is achieved and the paint becomes brittle and cracked after some time due to post-curing, this process continues several years.

Of course, a distinction must be made as to whether it is a paint flaking or whether the area has a crack signature. If the final coat of paint does not adhere well to the underground, it can often "bounce off" with a small stroke, but this is by no means structural damage to the carbon.

More about this in our carbon bike adviser, under small fissure or flaw in the carbon frame

Hairline cracks at connection joints or connection points of the individual tube segments on the carbon frame are to be assessed differently in comparison to seat or chain stays. The greatest loads, the entire driving force and the no less great torsional forces through riding out of the saddle are transmitted through the bottom bracket shell. The bottom bracket knot itself is therefore the most massive subsector of the entire frame. Despite the stiffness of carbon, there is still some movement, albeit minimal, which can then be seen with minimal hairline cracks, especially if there are also material transitions between the carbon bottom bracket body and a glued aluminium bottom bracket sleeve. Here, unavoidable stress peaks occur due to the force flow across different materials (carbon-> adhesive-> aluminium). These peaks can be minimized by the appropriate choice of a mechanically highly stressable adhesive, but they cannot always be avoided completely, because even a mechanically highly stressable adhesive becomes brittle over the years and thus loses its bonding properties.

In comparison to damage, cracks, on tube segments, these are therefore less dramatic, which does not mean, however, that they are simply ignored. More about this in our blog post: Cracks on the bottom bracket, (this blogpost is under construction)

Carbon frames with dropouts or even integrated derailleur hangers made of carbon material are usually impossible to repair. This is usually the end of an affected frame, because the structures are too small to be able to repair the point loads, point forces, of the rear derailleur to the existing structure over a large area.  In a few exceptions a modification can be made to another derailleur hanger. A help@carbon-bike-service.eu is always worthwhile.

Basically carbon frames with aluminium or, more rarely, steel dropouts are preferable to full carbon frames, as isotropic materials are much better at absorbing point loads and transferring them into the frame. But even that is no guarantee of durability.

More about this under: A defective, destroyed rear derailleur hanger / dropouts made of carbon or aluminium can easily lead to annoyance and shutdown of the bike

It looks different again if you have had an obvious, capital accident due to a fall or collision. First of all a detailed visual inspection of the complete carbon frame is absolutely necessary. Special attention must be paid to the transitions, such as bottom bracket knots to the chain stays, dropouts etc. Great care is required on the carbon handlebars, in the direct transition from the stem clamp to the handlebars themselves. Carbon forks and carbon handlebars should usually be replaced after an accident for your own safety, but depending on the damage, a full carbon repair is still possible. Read more about this in our blog post: Replacing carbon handlebars, what are the arguments in favour and against?

It is also strongly recommended to disassemble the fork for visual inspection in such a case, as well as once in the annual maintenance cycle.

If after a thorough visual inspection no damage can be detected, but personal insecurity is still high or the accident was intense, we recommend a non-destructive material test to exclude possible hidden damage such as delamination (detachment of the individual carbon layers from each other inside). More about this under: non-destructive carbon frame testing

If the frame is completely broken in two parts, we recommend replacement, as in this case the frame geometry is "lost".

At this point it should be mentioned that the Carbon Bike Service also offers steerer tube extensions. This may sound technically impossible at first, but if done correctly it does not create any risk.

For your own safety and responsibility for life and health, as well as for your family, we strongly advise you not to attempt to repair your own equipment. Also, a cracked carbon bike should not be provisionally stabilized with hose clamps and any temporary plastic or metal splints.

The frame will not break during the gentle, rolling straight ahead ride on the flat, but the unexpected pothole in the downhill will be the killer. Here the cracked carbon structure has no reserve and this peak load, the impulse from the combination of speed and pothole, can no longer compensate. The myth of sudden failure is refuted here. 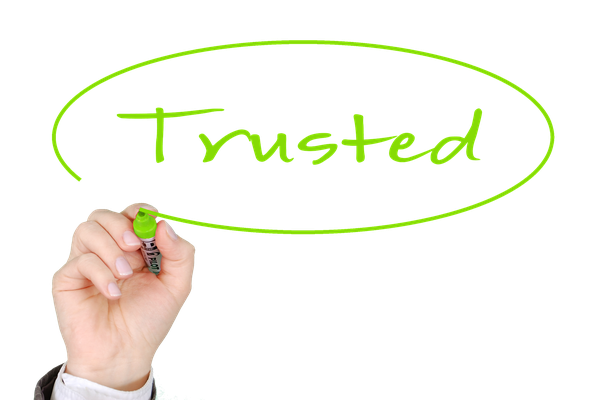